Common Core State Standards nail down precisely what primary and secondary education (K – 12) students are expected to learn in mathematics, reading, and writing.  Learning related transferable skills is the primary objective of a K – 12 education because it is a foundation for higher education or training and eventually a career. On their website, Common Core State Standards Initiative publishes standards by subject and grade level; this is powerful because it makes teachers, tutors, students, and parents aware precisely what students are expected to learn. Teachers incorporate the standards into their lesson plans and parents and/or tutors provide supplemental learning to keep students on or above the standards. Like in many fields, the internet is transforming education by making information (Common Core standards) readily available to laymen (parents) so they make better decisions. 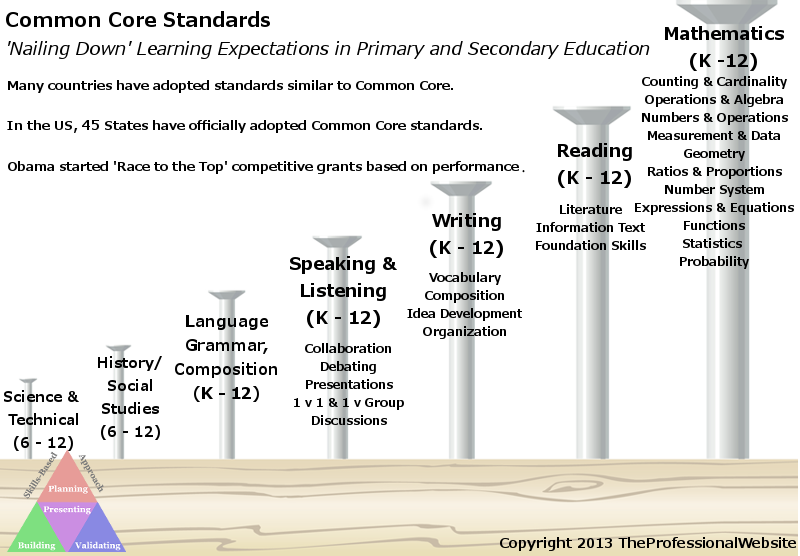 There are a few objectives of Common Core.

Common Core State Standards are the path to renewed competitiveness, and they deserve to be at the center of every state’s effort to improve the education – and future – of every American child.[ii]

The reception to the Common Core testing has been tepid. In New York, test results dropped 30 percent in a year.[iii] Last week, I heard on the local news about a town meeting (in Upstate NY) where parents and legislatures discussed the results of the Common Core thus far. The majority of parents addressed their concerns of students underperforming and seeing poor test results, and here are some of their points:  The wording of questions might be confusing… My child is a poor test taker but gets good grades…  My child has great social skills and is creative but is underperforming on the test… Many of the arguments surface with any type of standardized test, moreover, the Common Core is new and meant to be challenging – a way to stimulate our kids.

I think we should embrace Common Core and use it as a motivator to improve learning in the classroom.  Of course, teachers have the biggest responsibility to effectively incorporate Common Core into their lesson plans.  To support their efforts, there should be free, universally accessible online courses and games designed to build skills related to Common Core (similar to MOOCs or badges); there are already Common Core preparatory classes (but they clearly favor families that can afford them).

Common Core is a precursor to the CLA+. Common Core tests for aptitude in math, reading, and writing, all of which are necessary to think critically. With the CLA+, students are given articles, data, and an agenda and are expected to write a well composed, persuasive essay. Interestingly both tests are writing intensive and challenging.

Common Core works with a Skills-Based Approach by helping students identify core-competencies to plan the building of a skill set. For example, students who score high in mathematics might focus their attention on a STEM related field. Students start developing their skill set utilizing whatever learning channels are available to them in and out of the classroom.