INTELLIGENT SYSTEMS + NETWORK/TEAM (YOU AS A MEMBER) = COLLECTIVE INTELLIGENCE 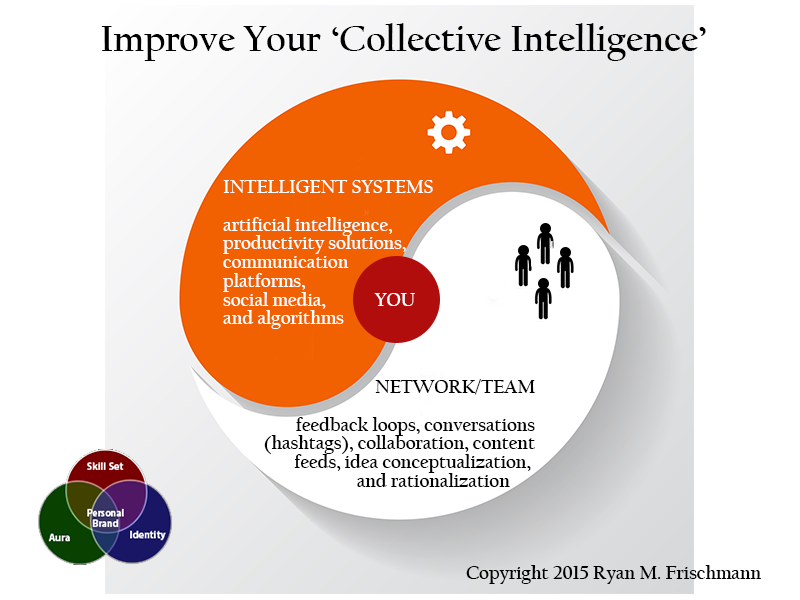 With social media, you engage with a network and build concepts collectively. Someone has an initial inspiration such as a blog or article post and then a network responds through commentary. That initial concept usually evolves into something deeper and richer. This exchange is especially effective in LinkedIn, perhaps because professionals’ reputations are at stake. In A World Gone Social, the authors summarize it:

By sharing knowledge and best practices, the community grows, collectively.[i]

Professionals are able to claim a concept (something they are researching or thinking about) and attract interested parties through a network. The best ways to distinguish the concept is to create a hashtag, something all of the social media platforms use for conversations. Of course, a traditional search in social media or Google on the concept also works. Once there is a following, you have effectively created a feedback loop – an effective way to collectively build a concept.

Your network also feeds you relevant content, stuff they have created or curated. Intelligent systems also feed you content through algorithms. Because of the massive amount of content produced on a single day, you cannot read everything. Much of your ‘daily knowledge gain’ is based on what content is fed to you. Many of us get our daily news from Twitter and Facebook.

But probably the biggest gains in ‘collective intelligence’ comes from groups working together and using technologies to solve problems. A well-cited article Evidence for a Collective Intelligence Factor in the Performance of Human Groups has two strong conclusions. First and foremost, it is possible to measure and sometimes predict a group’s collective intelligence. Second, it is strongly correlated with “the average social sensitivity of group members, the equality in distribution of conversational turn-taking, and proportions of females in the group” – not strongly correlated with the individual intelligence of its members. To the ballyhoo of those trying to improve team dynamics, it turns out motivation and cohesion are also not good predictors. [ii]

Intelligence in all its forms relates to personal branding. Think about it. In an evaluation of a person’s reputation (personal branding is synonymous with reputation management in many ways), two things always come up: that person’s smartness and how well he or she works with others. Your maximum level of expertise with a skill set is largely determined by your individual intelligence (and to some extent your collective intelligence). Your identity and connectedness defines what networks you can tap into to maximize your collective intelligence.

[i] Ted Coine and Mark Babbitt (2014). A World Gone Social: How Companies Must Adapt To Survive. New York: AMACOM.